Vienna’s coffee culture, that has been brewing amidst the whispers of its smoky coffeehouses, has given birth to more coffee variations than anywhere else on the planet. Yes, that’s right. We’re not bullshitting you.

We know you’re going to try and fight back with claims that Italy or France is the capital of coffee, and we do not contest – they do prepare a quality cup – however the truth of the matter is, here in little old Vienna, coffee has mutated into 40 different coffee kinds. Some of them may be rebranded copies of other creations from around the world, but the Viennese have claimed them, nonetheless.

We’ve captured, in strangely beautiful pop art photography, 13 coffee creations that have survived, and are still served in many of the coffeehouses around Vienna. 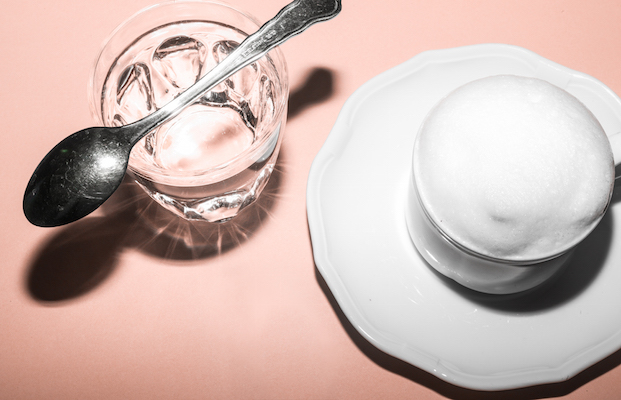 Ahhh, the mighty Melange. To be found on every menu around Vienna. A mélange (that’s French for ‘mix’) of one shot espresso, a splash of hot water served in a cup, topped with a mountain of frothy, steaming, foamy milk (we know, it sounds as sensual and sexy as its name). Some say it’s similar to the Cappuccino, but to those people we say – with nostrils full of froth after our first sip of our morning Melange – ‘we have the fancier sounding name, and our froth is bigger than yours.’ 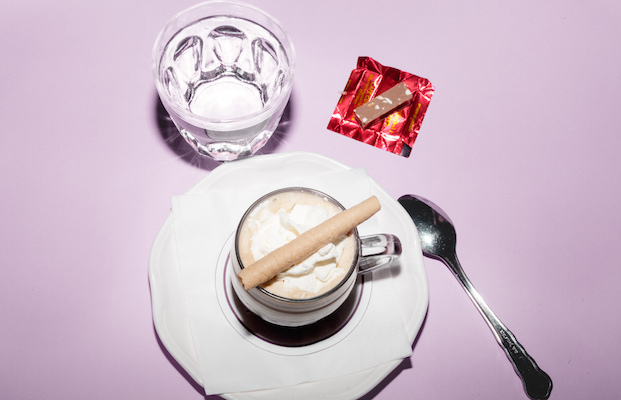 The Einspänner is the coffee every woman would order if it was a man – strong and with a creamy top. Ok, wait a second. We’ll have to rethink that line. Anyhow, while we’re working on that – this coffee creature is part of the Vienna cream-topped coffee family, but stands out from the crowd by being served up in a glass. It’s not only trying to be an individual with the whole glass thing, however this also had a purpose in ye’ old days. While another Vienna coffee is named Fiaker after the horse and carriages you can still find clippety-clopping around the city, this was the preferred drink of most Fiaker drivers. The glass kept the hands of the Fiaker driver warm, while the cream top would act as a insulator for the coffee in the depths below. It would also keep the coffee from jumping out of the glass during their bumpy rides. Also, rum would often be thrown into the mix (lucky the horses knew where they were going). 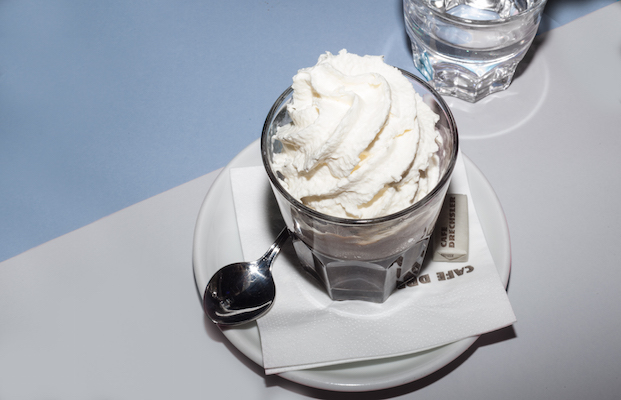 The Fiaker is the low fat version of the Einspänner that the horse and carriage (which is called a Fiaker in Vienna) drivers would settle for when they felt they were slowing down the ride and the horses would file complaints about the extra weight they were carrying. Ok, we may have made that up. The Fiaker is an Einspänner, minus the cream… traditionally, anyway. Many places serve it up with a squirt of cream nowadays as most of us have moved on from horses and are now being pulled along by public transport or automobiles that can handle our cream puff asses if we want to indulge in a coffee with cream… and rum. 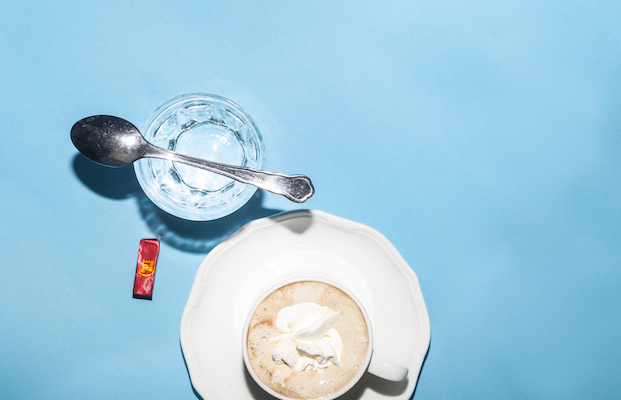 The Biedermeier age of design was all about a focus on restraint, elegance and comfort. Well, there’s nothing elegant about the coffee that shares the same name, which comes with a dollop of cream bobbing about in it and a shot of apricot liquor hidden within its depths. But we could imagine one of those elegantly dressed, round-faced, button-nosed and stout old ladies trying to restrain the alcohol-and-sugar-induced giggling as she sips at her Biedermeier with her ringed pinky finger in the air. 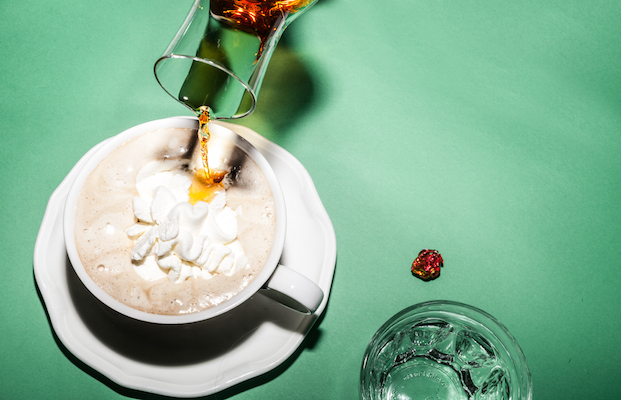 There’s nothing wrong with hiding a bit of booze in your coffee, according to ye’ old Maria Theresia. Especially if it’s orange liqueur – it’s kind of healthy then, isn’t it?! This coffee creature will warm you from the inside out, well, that will be mostly the alcohol doing the warming. God knows why they named this coffee after the Habsburg ruler, but hey, who knows why they named a computer after a fruit. 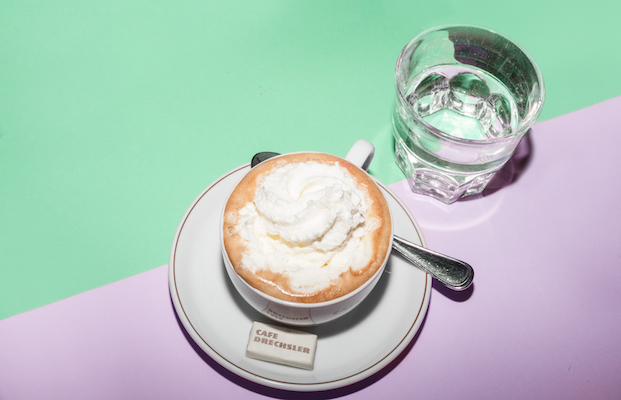 The Italians call this one ‘Espresso con panna,’ but for some reason in Vienna it has been named Franziskaner, which is German for Franciscan monk. Now we know how all those monks in the story books got their butter bellies – it was the cream in their coffee. The Franiskaner is exactly the same as a Melange, but with a lump of cream thrown in. Perhaps it’s a holy lump of Schlag, hence the name. 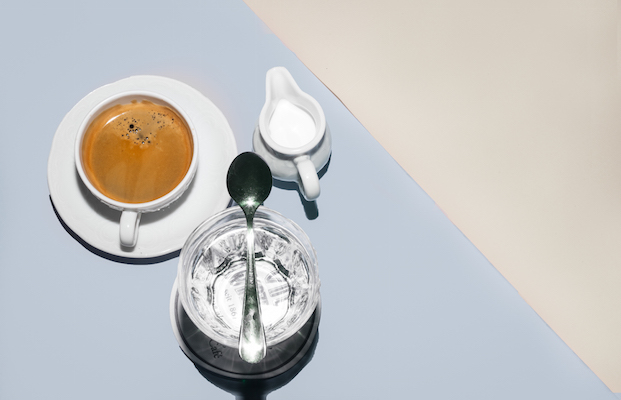 The Kleiner Brauner is named with one of those no bullshit, obvious German terms that make us love this language – it translates to ‘small brown,’ which describes this coffee to a tea… wait a second. A shot of espresso with a shot of milk on the side. This little guy walks the line perfectly for when it’s 3pm, you’re craving a coffee kick, you don’t want a pile of milk to go with it, but you think straight black coffee is like drinking an grumpy old guy’s bitterness and regret, liquefied. 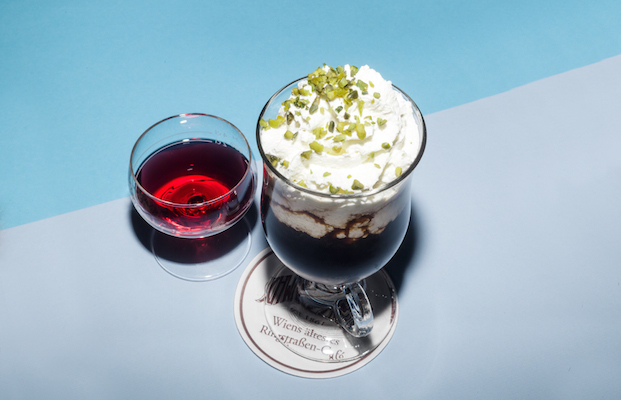 While teams of scientists have performed experiments on tiny Austrian mice wearing permed and powdered wigs in their research to discover what was behind the gifted young Mozart’s ability to pop out symphony after symphony by the age of 10, we’ve found the answer – slip a little cherry brandy in your coffee. We have a sneaking suspicion that this coffee with its sprinkle of pistachios on top may have just been made for the sake of tourists, however, who are we to judge. It was delicious and the 5th one even inspired symphonies to come out of us.

Please note: no tiny Mozart mice were harmed in the making of this article. 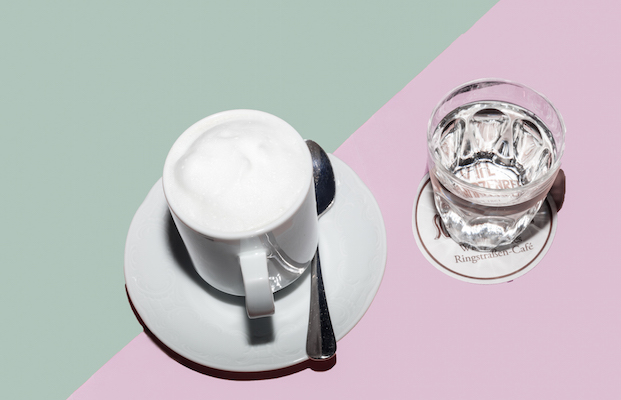 A Häferlkaffee is a mug of milks, with a drop of coffee for taste. That’s it. Nothing fancy about that. But there’s nothing wrong with the simple things in life, as Oma would say. Well, actually our Oma drank Lattes through a straw… made of rare snake skin from a coffee cup made out of crystal, but anyway, we like the way the word ‘Häferl’ sounds when we say it out loud when exhaling. It kind of sounds like an elephant getting out of a beach chair. Try it. 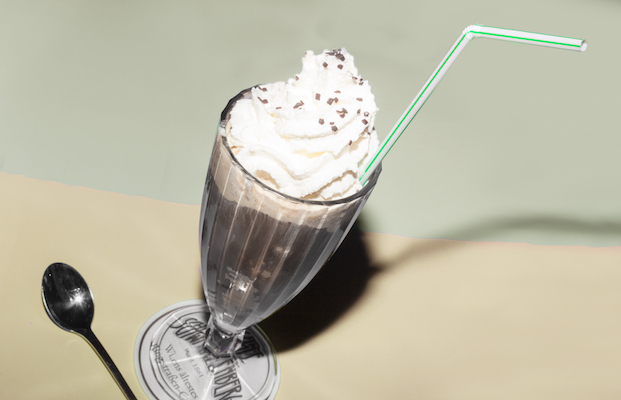 Served up in a milkshake glass, this is the coffee of summer in Vienna. And while this wasn’t invented in Vienna, we like to think it was, so we included it in the list anyway (fake news is doing worse things to the world). Actually, a lot of the world could do with a Wiener Eiskaffee. Made up of 1/3 coffee, 1/3 milk, vanilla ice cream and a pile of cream, sipping at the Wiener Eiskaffee through a straw and shovelling at the cream with those freakishly tall spoons is like being an adult and a kid at the same time. 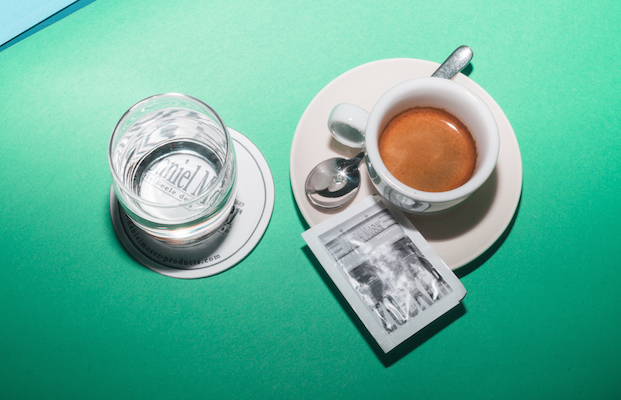 A Mokka is what the Viennese call an Espresso, just like in some parts of the world, some people call a Dachshund a Wiener dog. Neither of these fun facts relate to each other, but we’ve been waiting to slip that into an article for ages. 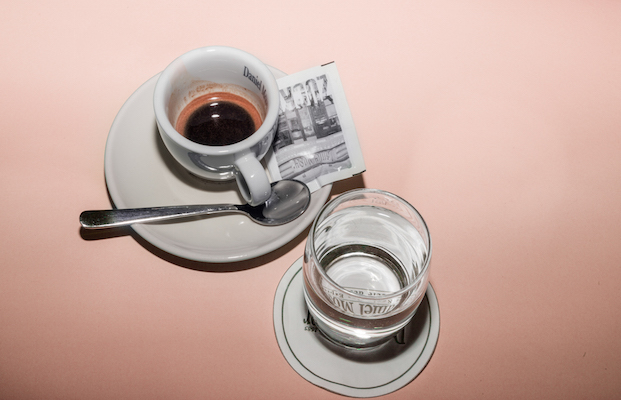 The Kurzer is the mini-me of the Mokka. In Vienna, they understand that you can never have too little of a good thing, and this explains why it’s one of the few places in the world you can get a shot of beer called a Pfiff (0.3l of beer) and a teeny-weeny, little, baby, micro, mini (ok, that’s enough) Kurzer. These are great for when you’re on the run. They’ve also been known to be snorted up the nose (ok, we may have made this up, as well). 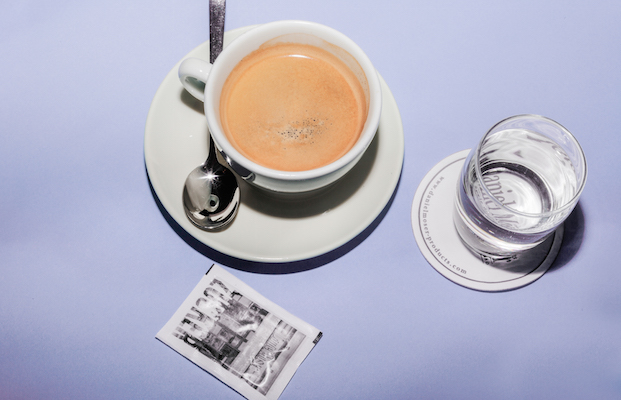 Why shoot a shot of coffee back when you can stretch it into a whole afternoon in a coffeehouse. This is like the arch nemesis to an Espresso. It actually is an Espresso diluted by hot water, hence the name, Verlängerter which means ‘extended.’ This coffee calls for never-ending conversations over a coffeehouse marble table.

1. Vienna’s nightlife scene makes an annual revenue of about 1 billion Euros Yup, that’s quite the sum. That would amount...

The Wurst Guide ep 16: An Austrian kind of summer holiday