A guide to a Viennese Würstelstand etiquette: 13 bite-sized tips
Skip to content A guide to a Viennese Würstelstand etiquette: 13 bite-sized tips

Right after coffeehouse culture, the adoration of the mighty sausage is serious business in Vienna with a cult status.

The temples of this religion worshipping the Wurstel are called Würstelstände (sausage stands). These are beloved institutions in this city, where all kinds of people gather around their warm light, from handsomely dressed opera goers after a performance to red-eyed, wonky walking party people at 4am.

A specific etiquette belongs to how one behaves at a Viennese Würstelstand. We’ve interviewed Würstelstand owners across the city – including Vera Tondl from Würstelstand LEO, Vienna’s oldest sausage stand – and asked those in the know to bring you these 13 bite-sized pieces of Würstelstand etiquette and insider tips. 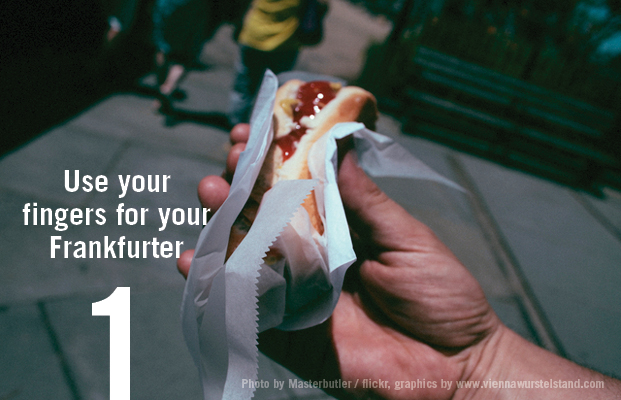 Asking for a knife and fork at a Würstelstand is not an option, and while you’ll be automatically given a miniature fork to eat most sausages, a Frankfurter should be eaten with your fingers. Another common way to eat the Frankfurter is in the form of a hot dog. 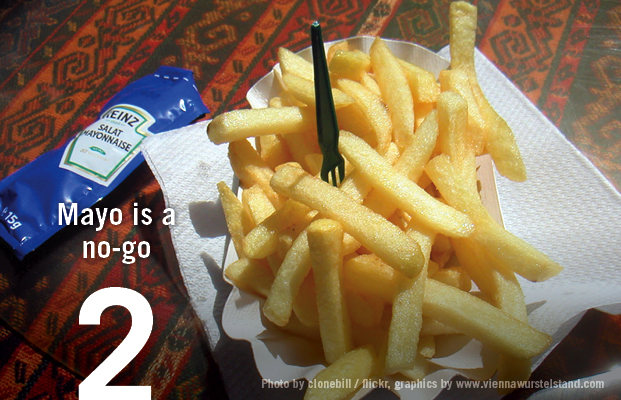 Ordering mayonnaise at a Würstelstand is acceptable in only two situations: Either you just ordered a portion of French fries, or you want to piss off the Standler behind the grill. Should neither of them be the case, go for a squirt of ketchup, or choose between sweet and hot mustard. 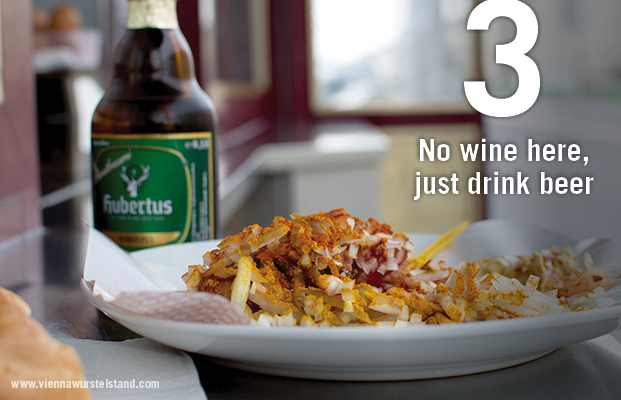 The Würstelstand is a no-frills, humble meeting place. Beer and soft drinks are the beverages of choice – and the occasional chocolate milk to help put out the flames after eating a very hot Wurst. If you want to wash down your Debreziner with a glass of Chardonnay or a Mai Tai, you’ll probably learn some new colourful words in Viennese. 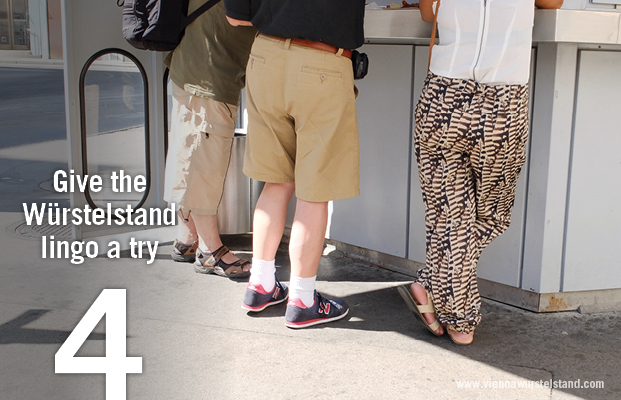 The Würstelstand owns a language of its own. And the locals love it if you try to weave some Würstelstand lingo into your order. Next time, give these words a try: 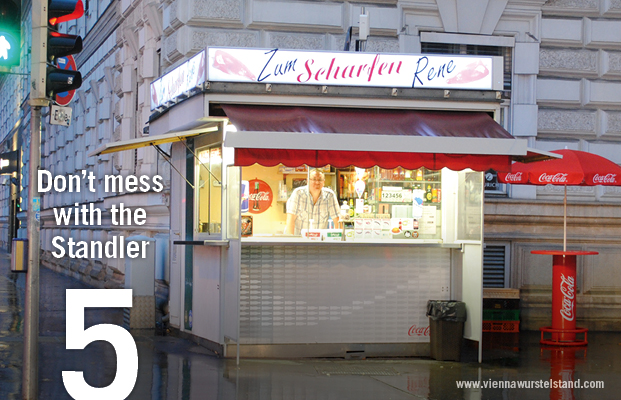 The Standler is the God of this holy place of Würstel worship. Well, maybe we’re exaggerating, but there is something about them being behind the grill that lends them an automatic respect from one and all, especially the loyal late night regulars. Taxi drivers, street workers and other clientele will outnumber you if you should try anything funny, or give too much cheek. Respect the Standler, enjoy their company, listen to their stories, and ask the Würstelstand owners about their most memorable nights. These truths are stranger than fiction, we tell you. 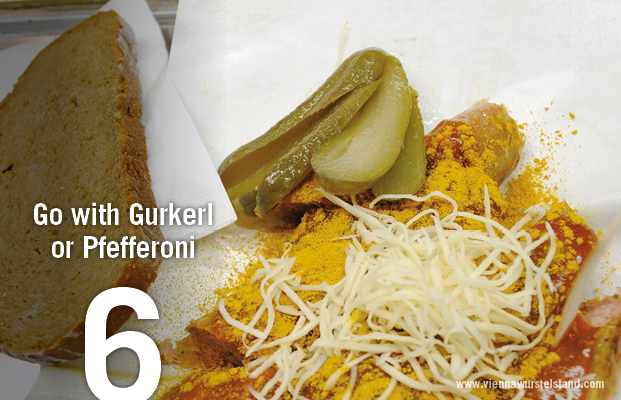 Floating around in that cloudy liquid in some big-ass jar, these delicacies may not look so appetising, however we’d recommend you do like a real local and give them a go. You’ll love the snappy crunch a Gurkerl (gherkin) or Pfefferoni (chili pepper, either oily or hot) will make as you bite on it between mouthfuls of your sausage. It adds another layer of texture and taste to the experience. And will unleash a great surprise on whoever you may be kissing afterwards. 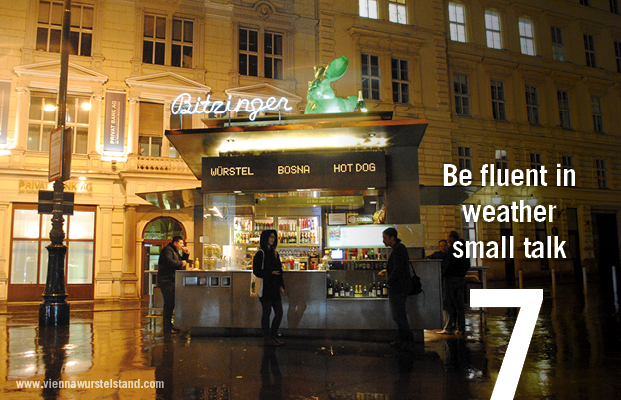 What happens when strangers meet to spend a distinct amount of time in a small space? They either fall awkwardly silent, or they start talking about the weather… or whatever other small talk they can conjure up. In Vienna, complaining about the current weather conditions is a common hobby. While chats at the Würstelstand can get deeply philosophical, small talk is a big thing at a Würstelstand. 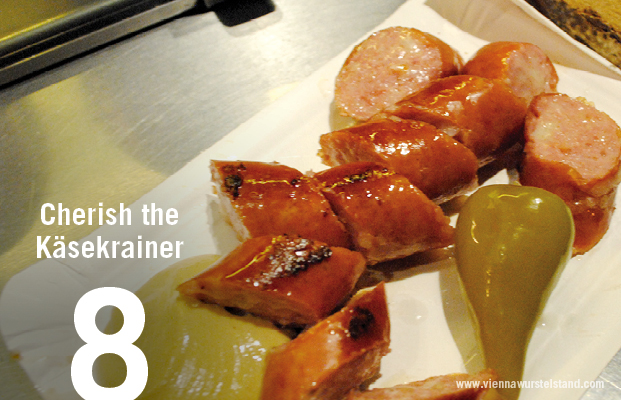 This feat of the Austrian kitchen which owns a nickname that compares it to pus – the mighty cheese-filled Käsekrainer – is the source of a lot of pride for any sausage loving Austrian. Respect it in all its glory as the sausage of all sausages in Vienna. And keep in mind (these sausages should come with a safety warning): be sure to stand in spitting distance from everybody when first biting into this baby – they spit hot cheese! 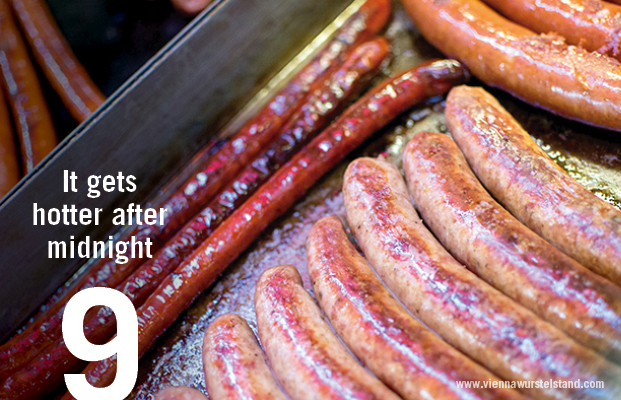 This truth, while quoted to us wisely from a Würstelstand owner, could apply to any good night out – it gets hotter after midnight. However, these words of wisdom refer to the tip that you should order a spicy sausage option when you’ve been drinking. It will set fire to any hangover you were destined for the next day.

Fun fact: the chunky slices of hot pressed meat known as the Leberkäse is a valid alternative at any quality Würstelstand. Meanwhile, while the name would suggest that it contains Leber (liver) and Käse (cheese), it doesn’t contain either (we can hear your groans of disappointment). The Leber reference comes from the old German word Laib, which means loaf. But before you get too disappointed, never fear – you can get a version with cheese by asking for Käsleberkäse – a highly recommended diet snack (warning: levels of sarcasm bordering on radioactive in this sentence). 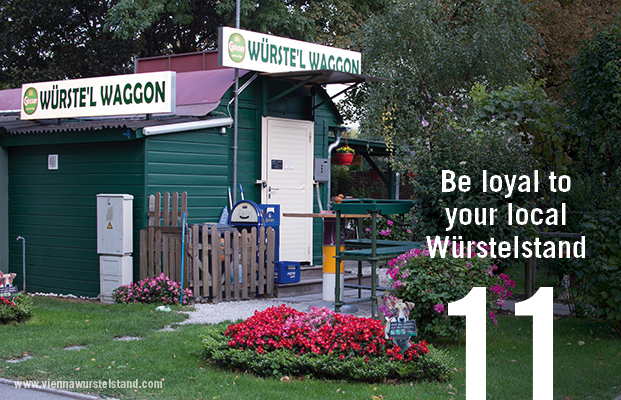 Everybody has their favourite local neighbourhood Würstelstand in Vienna. After all your friends have ditched you at 2am after a night out, there, your Würstelstand will be there for you like a lighthouse of safety. Our local favourite is called Klasse Hasse (translation: classy Burenwurst) with a guy named Hassy behind the grill who is missing a finger, and yells Ja, Wohl! everytime an order comes in. 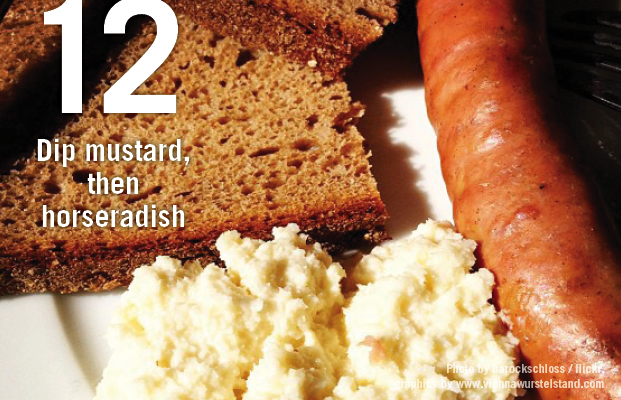 Directions to Würstel-mustard-horseradish bliss:
1. dip your sausage in mustard
2. follow this by rolling your mustard covered sausage in a bed of horse radish
3. close your eyes and meditate on the food-gasm that’s about to roll over you 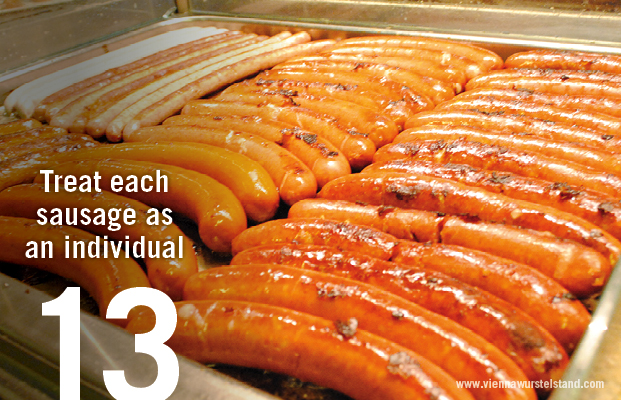 Each sausage is an individual and should be eaten in its own unique way. For example, you should never ask your Standler to cut up a Franfurter, whereas a Bratwurst is best enjoyed cut into big, chunky slices, laid out on a paper plate, with a dollop of ketchup and mustard next to it, accompanied by a slice of bread. Ask the Standler behind the grill when in doubt.