Uncover the rarely seen, and be led through the cobblestone streets and secret alleyways of Vienna’s old city center – with Vienna Würstelstand’s self-guided walking tour.

Start: Waltz through the the palace gates, and BAM! you’re in Vienna’s old city.

Stand in front of the half moon of the Hofburg (the imperial palace) – reminds us of a wedding cake. 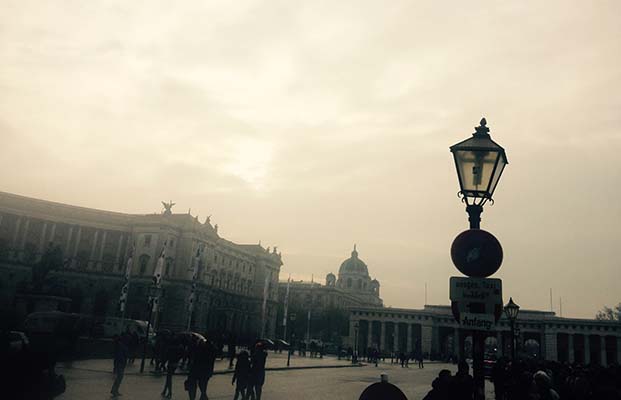 Imagine standing on the balcony on which the likes of the Hapsburgs and Hitlers of history stood, speaking to crowds of hundreds. The name Heldenplatz (Heroes’ square) is linked to the two horseman statues, who both failed in their battles – history romanticised.

Look over your shoulder – that’s the gothic crown of the Rathaus (city hall) poking over the trees.
Onward into the Hofburg, do a spin and take in the courtyard for a moment.
Take a right into the Schweizerhof. Weave through the courtyards, come out the other side of the tunnel at Josefplatz.
Tap dance on the cobblestones, look up and wave to Atlas and his golden balls, and continue. 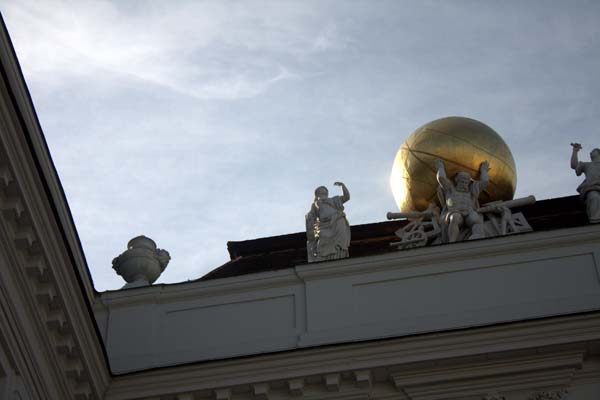 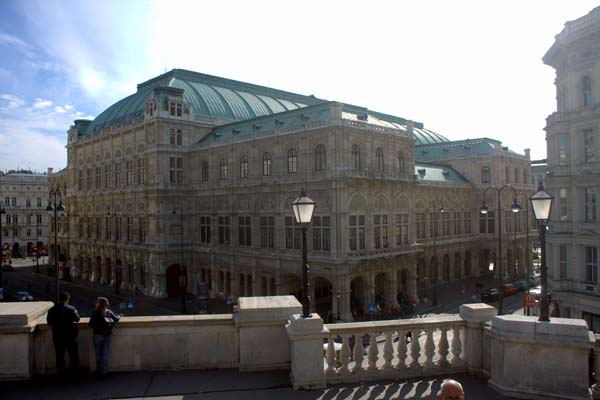 Fly up the steps of the Albertina gallery (housing one of Europe’s most valuable art collections), onto the terrace. Kiss somebody as if you’re Ethan Hawke and a French girl upon the backdrop of the magnificent opera (sound familiar? You have seen this scene in “Before Sunrise”). Head down the ramp, through the Burggarten gates and enter the glasshouse looking structure. You’re in the Palmenhaus coffeehouse. Sip a coffee under a palm tree, if you feel like it. 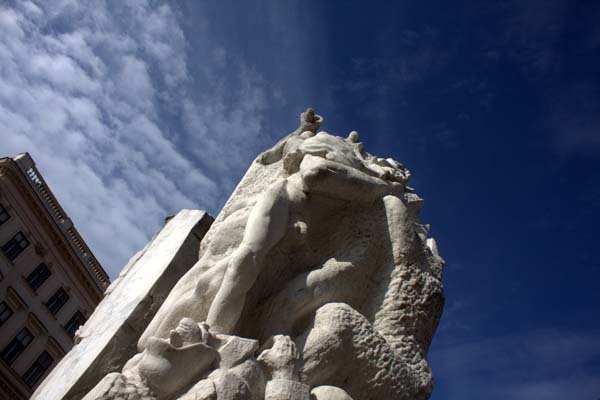 This white tangle of human bodies grappling towards the sky commemorates Austria’s dark days of facism and war.
Onward, up to the Neuer Markt for a bowl of coffee (yes, you heard right) and croissant at the French café, Le Bol, if you skipped the Palmenhaus. Left. Little galleries and over-priced old stuff in antique store windows.

Be sucked into the hidden courtyard alleyway at Habsburggasse 14, and spat out onto ancient Roman ruins at bustling Michaelerplatz. 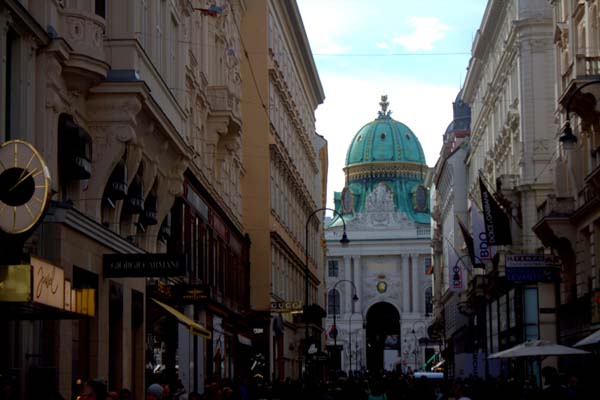 Sing your favourite song under the dome of the Michaelertor at Michaelerplatz . Walk up the Kohlmarkt boulevard past boutiques with price tags on clothes higher than the cost of the store’s rent. Stop at Julius Meinl, turn around, look over the sea of people on the boulevard in all its glory, and the copper green dome where you sang your song. 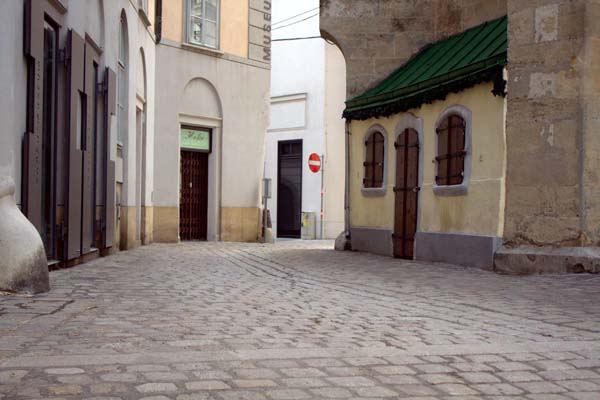 Squeeze through the alley next to the little button nose cottage attached to old the monastery. If you see a sign saying Schulhof your standing in a part of the old Jewish part of town, and alongside an old Jesuit church. Sit and wait for a horse and carriage to clippety-clop past. 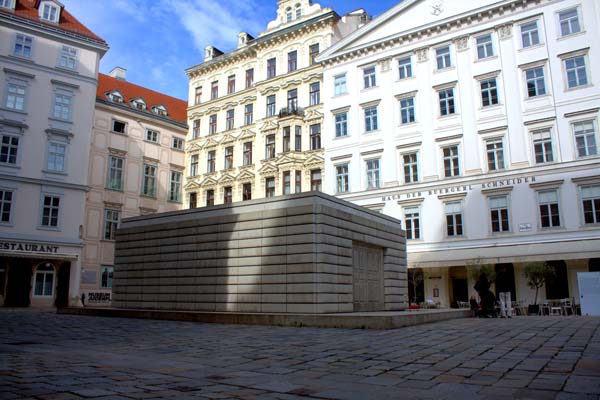 Judenplatz (Jewish square) – Sit at the nameless library (the concrete box in the middle of the square). Ponder what it stands for and why it honours the Austrian Jewish victims of the Holocaust. Think about it in the square’s silence. Then look to the lone statue of German writer, Gotthold Ephraim Lessing, and think of his words: “Think wrongly, if you please, but in all cases think for yourself.” 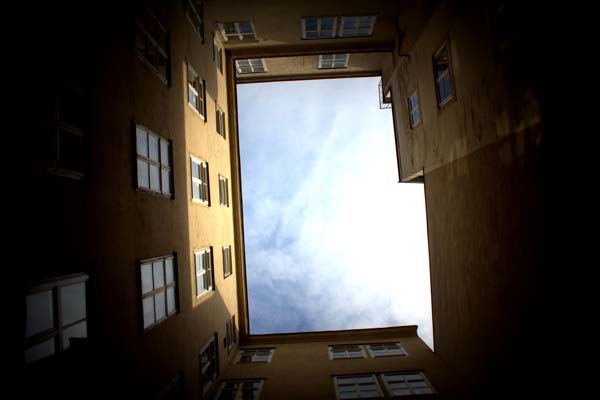 Right onto Kurrentgasse, slip into the open door next to the Arthur Grimm Bäckerei (bakery). In the narrow courtyard, look to the sky and see how the Viennese once lived … and still do. Listen for sounds of life from the apartments above. Walk down the narrow alleyway located just before the talented goldsmith’s workshop, called the Ring King. Knock on the ancient wooden door down the alleyway and run. After soaking in the cute little courtyard, of course. 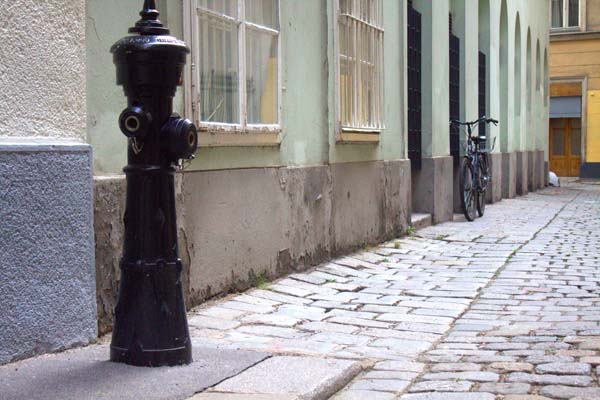 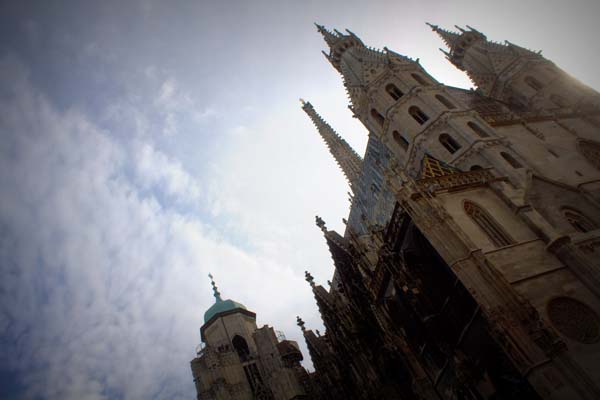 At Café Korb there’s a crossroads where two options present themselves.

1. Take a detour to Peterskirche (church of St Peter). An American priest who smoked, drunk and swore once explained to us: “this Baroque church, like all Baroque churches, implies heaven is here with us on earth. The brightness, the angels – it gives us a preview of the coming attractions in heaven.”

2. Have a coffee at a local favourite coffeehouse, Café Korb. The café’s owner is a famous provocative model turned prominent personality in Vienna, Susanne Widl. Google her. Actually do both of these things, if you have the time.

Walk narrow footpath until Stephansdom flies up out of nowhere in front of you in all of its glory. Take a selfie with saintly Stephan and go inside the gothic arch entrance. Sit at a wooden pew, close your eyes and listen to the echoes. Then light a candle. Spot the skulls and explore gothic architectural features.

The same smoking, swearing American priest explained: “Gothic churches are designed to remind us that we are mere mortals. And the steeples are so high because they’re reaching up into the heavens.” Religious or not, that’s a hell of a holy thought.

Escape tourist crowds through the tunnel at Stephansplatz 6, opposite the horse and cart parking lot. Skip over Wollzeile street into arched entrance to alleyway with the sign Figlmüller above it. Look through the window at famous Heuriger (wine tavern), Figlmüller. Wipe up drool caused by the sight of golden Schnitzel bigger than the plate people feast on inside. Look into the little jewellery shop Schatz Ecke next door. Imagine the stories lived while people wore those rings and other faded gold and silver things. 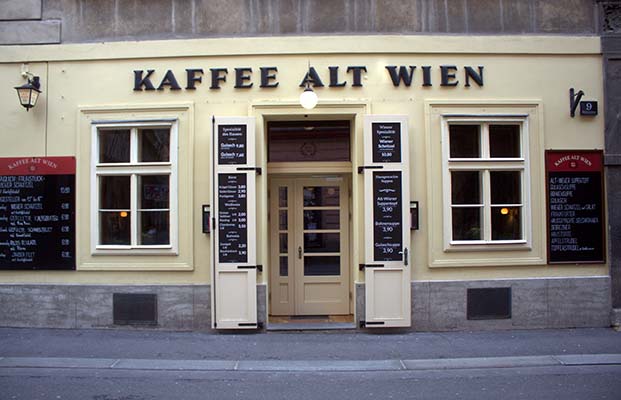 Popping out on Bäckerstraße (Baker’s street). Pop into Kaffee Alt Wien coffeehouse for homemade Apfelstrudel, or beer and Frankfurters, horse radish and mustard. Use your hands like the locals do.

Blutgasse (blood alley) – several legends live here, some of them explaining the name. Google it when you get home, or create them with your own imagination while strolling the street. 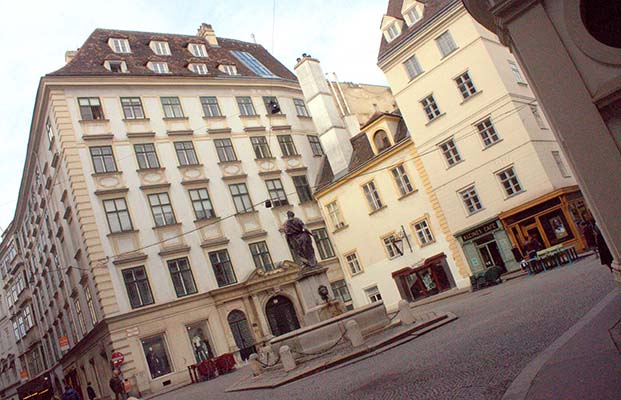 Franziskanerplatz. Kleines Café (Vienna’s smallest café and one of its most famous) on a charming square with a fountain. Go into the church named after the square. Perched above the entrance inside is Vienna’s oldest church organ. 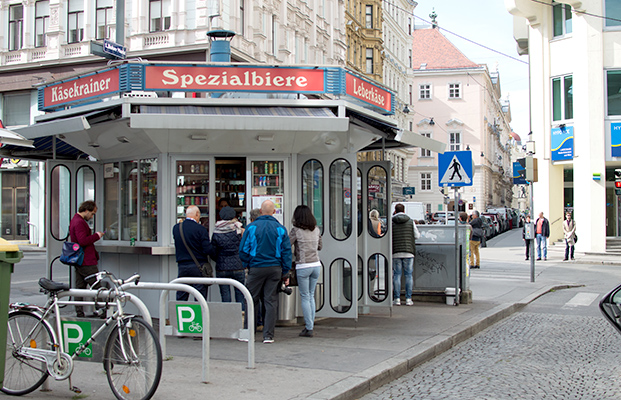 Duck through the arched walkway labeled, Tischlerei (joiner’s workshop) and peek into the old workshop still living on the alleyway.

The End: Würstelstand am Hohen Markt. Every good story in Vienna ends with a würstel and beer.

1. Vienna’s nightlife scene makes an annual revenue of about 1 billion Euros Yup, that’s quite the sum. That would amount...

The Wurst Guide ep 16: An Austrian kind of summer holiday